And, flinching from the insect's little sting,

While 'twixt him and that hypocrite the sun,

To which he prays, comes windless pestilence,

Transparent as a glass of poisoned water

Through which the drinker sees his murderer smiling;

She stirs no dust, and makes no grass to nod,

Yet every footstep is a thousand graves,

And every breath of her's as full of ghosts

As a sunbeam with motes.

Posted by Alistair Ian Blyth at 16:38 No comments: 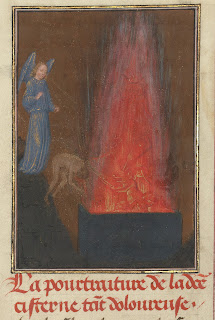 
Then his soul began to look around in an attempt to understand how it had come there and in so doing it saw a great pit, all square, just like a cistern. From this pit gushed an eddy of huge flame, blazing and stinking, and it was as if the smoke rose to the very sky. In that steam and eddy there was a very great number of devils and souls together that were lifted into the air within the flame and smoke, this being a most horrific thing to behold. And when these souls had been lifted very high in the air, they would all of a sudden tumble back down into the furnace. When the knight's soul saw this so pitiful torment, it would have turned away, but it could not raise its feet from the ground so great was the fear it felt. And seeing that it could not achieve its will, it was greatly angered and said, "Alas! wretched soul, wherefore wilt thou not believe in the Scriptures?"

Posted by Alistair Ian Blyth at 11:09 No comments: 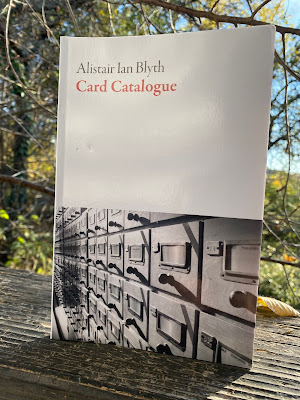 In the crepuscular Bucharest of the decade after the Revolution, the neurasthenic, amnesic narrator of Card Catalogue meets Obmanschi, a former political prisoner and unpublished writer of the pre-war avant-garde. Over many years, Obmanschi has compiled a minutely detailed card catalogue of the realia to be found in the classic Russian novel, whose categories include not only everyday material items, but also books as tangible objects and even the cockroaches whose rustling presence can be heard in Gogol, Goncharov, Dostoevsky, Tolstoy, Chekhov. Meanwhile, the narrator compiles his own catalogue of oneiric books and their insubstantial authors, one of whom, bewilderingly, may be Obmanschi himself. Obmanschi already leads a second, shade-like existence, having been reduced to an independent, fictional character in the informer’s reports submitted to the secret police over the decades by the superintendent of his building. In a series of dreamlike narratives linked by the subject of libraries—book hoarding, book hunting, dreams of infinite other books, past and future—Card Catalogue hints that fiction is ultimately an oneiric world unto itself, in which the characters lead their own tenuous, separate existence, like the shades in Hades.